Here at last are some pretty photos of some of my teawares; I had to take them more or less all in the same spot as we only have one really well-lit sunny spot near a window in the house, but I think they turned out fairly well. 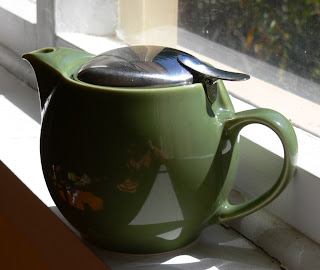 My Beehouse teapot, that I use every day (usually more than once!) 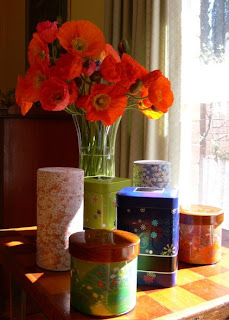 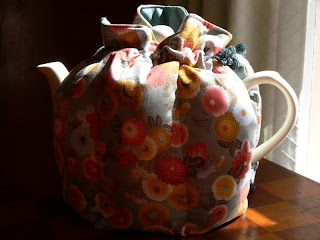 My enormous (6+ cups, depending on the size of the cups) London Pottery Farmhouse teapot, with the tea cosy that I bought from Tea Leaves in Sassafras (so pretty) 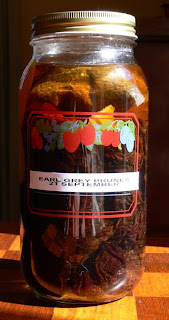 And last but not least, a picture of the Earl Grey prunes that I made the other day, which are currently steeping in the fridge and will be ready to go in another couple of weeks!

I spent some time taking some photos of my tea canisters and teapots on the weekend, only to have the camera run out of batteries before I could upload the photos to my computer. I still haven’t got around to charging the batteries (I keep forgetting), but in the meantime, check out these links to a fascinating series of articles about the teas of China being posted at T Ching by James Norwood Pratt. They contain many fascinating snippets of information, most of which are new to me, I confess (who would’ve thought that ‘gunpowder’ green tea originated as a means of keeping the tea fresh by rolling it into little balls with a small surface area?). There are four articles so far (including the introduction), keep an eye out for more as they come…

A while ago I posted about some Lapsang Souchong that I’d bought and found a bit difficult to drink, but that I intended to use it in some cooking (see the original post here). Shortly after that my husband and I tried out the Black Bean Soft Tacos (one of the recipes I found which uses Lapsang) but I kept forgetting to mention it here. We did take some photos, but unfortunately they turned out a bit blurry and rubbish, so I won’t post them (I do wish I had more skills of a photographer).

Anyway, we made the tacos and I really quite enjoyed them. They were extremely easy and quick to make (almost always a bonus in my book) and the pineapple salsa that accompanied them was delightful – really fresh and zesty. The recipe called for canned black beans, but as I had some dried ones at home I soaked and cooked them the regular way, then followed the recipe, which involved making up a strong brew of Lapsang Souchong and cooking – well, heating/steeping really I suppose - the beans in that.

This resulted in a lovely subtle smoky flavour to the beans – it wasn’t overpowering at all. I wouldn’t have minded if it had been a bit stronger, either – if you happen to have some chipotles (dried smoked jalapenos) lying around, as my husband naturally does (!), you could chuck one of those in there as well to add a bit of extra smoke and spice.

The recipe was very low in fat because the beans were just cooked in water – I think it would also work quite well though if you cooked the onion (and chipotle) with some olive oil and maybe some garlic as well to make the flavours a little stronger before you add the beans and the tea. Overall I thought it was great and I intend to make it again and experiment with it a bit.

A while ago when we had a bunch of people over for dinner, we made Nigella Lawson’s recipe for tea-soaked prunes, which she recommends serving with either custard or crème brulee (urgh), but which we served with ice cream and amaretti biscuits. The recipe for these prunes comes from Nigella’s book How to Eat, and involves turning some strong Earl Grey tea into a syrup with orange peel, spices, brown sugar and marsala, then steeping the prunes in it for a couple of days (or more). It is very simple, and absolutely delicious, whether as a dessert or for breakfast (I had some for both, I confess).

Because of the strong flavours mixed with it, I found it a little hard to detect the presence of the Earl Grey per se (a Twinings’ loose leaf from the supermarket, though the recipe itself called for teabags – shame, Nigella!). Consequently I am interested to try a recipe which my husband found in a slow-food book (whose name I can’t recall), which involves sticking the prunes in a jar, adding a couple of Earl Grey tea bags and a couple of strips of lemon zest, and pouring boiling water over to cover. Then you seal it and let it sit for a couple of weeks. I think that this method would let the flavour of the tea shine through a bit more. All I need is a decent jar to try making it in…

Also speaking of Earl Grey, earlier in the week I had a pot in conjunction with a piece of a particularly nice chocolate cake that I made – now Earl Grey and chocolate is a really good combination, I highly recommend it, indeed.
Posted by Veri-Tea at 3:28 pm No comments:

I had the happy experience of being in Melbourne over the weekend just past, which allowed me (amongst many other pleasant things) to catch up briefly with my sister over a cup of tea at a café near her work. We ended up discussing my blog, which my sister informed me makes her giggle because I ‘overthink’ (her word) things like tea and biscuits.

Heh, well if she thinks that I overthink these things she should check out some of the blogs and sites that I read, where water temperature, water source, teapot material, tea age, tea storage, the speed with which water is poured and the violence with which it strikes the leaves (and more) are all discussed in very vivid detail. Some of these hard core sites are listed at the side of this page; some others include The Mandarin’s Tea; The Half-Dipper; and Floating Clouds Gliding Eagle.

Anyway, I have continued to muse about tea bags lately. I took a box of T2 tea bags with me on my trip to Melbourne, as I wasn’t sure if decent tea would be available where I was staying with my friend (it wasn’t, although there was a teapot, yay!). When I caught up with my sister, the tea served at the café was also T2 tea bags. I took a chance on ordering the China Jasmine – I often hesitate over ordering green tea while I’m out as I’ve had some nasty experiences with it being burnt by water that is too hot, steeped too long, etc so that it ends up really bitter and indeed disgusting. This one turned out to have been brewed ok. (I am liking the T2 China Jasmine quite a lot, I have to say – lovely scent and flavour, delicate golden colour, it’s really very nice.)

I was explaining to my sister that T2 tea bags make me happy because they are a delightful harmony of shape, size and content. The bags are big enough to let the leaves expand, they are not packed too full of tea, and the tea is of course high quality. I know I have posted earlier here about Teadrop tea bags – and they are great tasting (especially when you’re expecting a Twinings or Liptons bag or something rather less than inspiring) but I have become rather disappointed in them and the way they are usually served.

The bags are bigger than the T2 ones, but they are also packed with a lot more tea that doesn’t really get the chance to expand properly (especially if it’s one of the chamomile blends that are bulky and take up lots of room). This irritates me greatly, especially when they are delivered in one of those titchy little metal pots that you get at restaurants and cafes – the Teadrop tea bags hold enough for about a 500ml pot, it just seems wasteful, not to mention poor value for money to use them in anything smaller. Ah well.

I promise another couple of posts this week, and also that I will stop raving on about tea bags. New topics will include tea and food; and teawares, with photos!
Posted by Veri-Tea at 12:06 pm No comments:

Apologies for the two-week silence; I have been rather busy and had a number of things on my mind that are not tea! Almost inconceivable I know. I hope to make up for my laxness over the next few days.

Excitingly, I finally received the book I ordered from Amazon – The Story of Tea by Mary Lou and Robert Heiss. I have only briefly glanced through it, because as I say I have been busy and I want to be able to settle down with it –and a nice cup of tea of course – quietly at a time when I can devote plenty of attention to it. Additionally, being a moderately bulky hardback it does not lend itself to easy carrying around!

As a matter of some desperation due to being at extended periods of work-related training with no access to decent tea, I have been using quite a few tea bags over the last couple of weeks. Now in my weekly perusal of other blogs I read a lot about how tea is about slowing down and relaxing and that this can best be achieved by brewing your tea properly in a teapot, etc. I suppose I hadn’t really thought much about this per se, as I usually brew my tea in a teapot anyway, but using so many tea bags did cause me to stop and reflect a little bit about the differences between methods. Below follow a few mixed ramblings about tea, time and how they interrelate, at least for me.

If I am brewing my tea with a teabag in a mug or cup, I am impatient. I know that teabag tea such as Twinings or Liptons is so finely ground that it infuses more quickly than loose leaf tea (even a fine cut one like a CTC or a BOP). Even so I want to hurry. 30 seconds seems too long to wait, even when I know that 2-3 minutes will produce a better (relatively speaking) cup of tea. I still feel the need to hurry even when I am using a high quality teabag with full leaf inside, like those from T2.

However, if I am brewing my teabags in a teapot, as I occasionally have cause to do, I am not so rushed. I am able to let it steep for the required length of time without feeling the need to hurry up the process. Teapots equate to a quieter brewing spirit.

When it comes to drinking, though, I find that if I brew from a teabag in a mug, I often burn my mouth when I take my first sip. The tea is too hot, because the water has come straight from the kettle into the cup, and thence into my mouth only a couple of minutes later. Tea from a teapot tends to be a better drinking temperature, even if I have warmed the pot properly before brewing, because it has had a bit longer to sit and cool. Consequently, I can sometimes gulp down teapot-brewed tea in a most hasty fashion, whereas self-preservation means I must take my time over the mug brew.

This was sometime a paradox, but now the time gives it proof. If anyone else has any thoughts about tea and time, do post them in the comments. I would love to hear from you!
Posted by Veri-Tea at 4:05 pm No comments: