Here are some beautiful tea-themed artworks, photos and images I've spotted round and about... enjoy! Sailing in a tea cup by Pragya K (thanks Jess for introducing me to Pragya's work!)

This one is a free printable card - thanks Kellie! 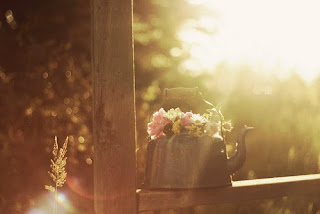 A beautiful tea kettle image from Tea for Joy

Stunning tea cups - found on We Heart It.

And I love the funky colours in this one (also from We Heart It).
Posted by Veri-Tea at 11:33 am 2 comments: Links to this post

Ever since I read a recipe at Chai Pilgrimage for 'Darjeeling Ginger Chai' I was totally smitten with the idea... and I have a LOT of Darjeeling floating around in the pantry, thanks to the arrival of another order from Thunderbolt Tea.

Check out the original recipe here... there's a printable download of the recipe card too!

So I've been brewing up quite a bit of it the last few days. The totally FOUL weather we have had lately has been extra encouragement. I really like the way the plain pure heat of the ginger harmonises with the brassy taste (I mean that in a good way) of the Darjeeling tea. I don't normally drink my Darjeeling with any kind of milk, but it has worked well. 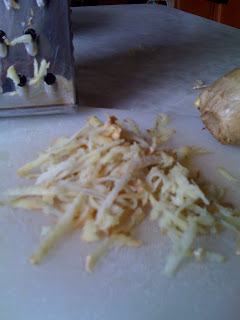 I've tried it with Risheehat and Giddapahar second flushes, and a bit of Arya first flush as well. I've used soy milk, cow's milk and almond milk. I've made a lot of mess with saucepans and tea strainers. 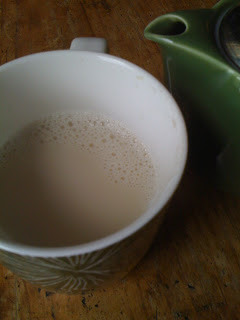 I think my favourite was the one with the Giddapahar and cow's milk... but that might also be because this was the only one I sweetened, with some syrup from some preserved ginger that I had used up earlier that day. Damn, that was good. And that was Pippin's first sip of chai, too! I should have taken a photo, but I was too busy being a tea-proud mama.
Posted by Veri-Tea at 11:59 am No comments: Links to this post

Do you name your teapots?

Some people do! Brett at the Black Dragon Tea Bar has a whole League of Pots... with superpowers... wouldn't want to mess with any of these guys or gals. I rather like 'Chip' myself - 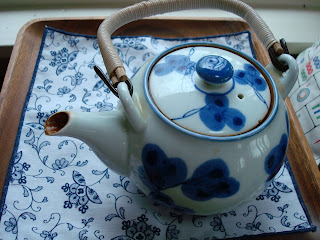 - his brewing specialty is Assam. Brett rescued him from a thrift store... I'm sure they are both glad about that!

Some little yellow teapots have a whole lot of personality all of their own, and even conduct interviews with other personable teawares.

To be honest it never really occurred to me to name my teapots. Perhaps I should? I wonder if they feel unloved, to go unnamed.
Posted by Veri-Tea at 3:33 pm 3 comments: Links to this post

Email ThisBlogThis!Share to TwitterShare to FacebookShare to Pinterest
Labels: teapots, teawares, thought of the day

Now this is a view of Mount Fuji that I really like!

Image from Travel and Tea
Posted by Veri-Tea at 1:19 pm No comments: Links to this post

I could rave about this tea for hours. So I will try and keep this short and sweet (because I anticipate that Pippin will wake up any moment and frustrate my blogging ambitions for the day).

The dry leaves, which are longer, darker and less broken looking than most sencha I've had previously, smell like strawberries and cream... and toast... and these flavours carry over into the brew as well. There's some bitterness, which is enjoyable; the second and third infusions break out into a multitude of herbaceous, even camphoraceous flavours.  Lavender? Pine? The leaves look rather like pine needles, as well.

This is like no sencha I have ever had before and it has opened my eyes to a whole new realm of quality. It came to me as part of the Tea Geek certification course (it's available for purchase on the Tea Geek website as well, which is where the image below is from). I may cry when I have worked my way through the rest of the sample - I think I have enough for another 2 cuppings - and then I will probably buy some more.

Posted by Veri-Tea at 1:53 pm 4 comments: Links to this post

This second flush Risheehat is another lovely tea I purchased from Thunderbolt Tea (can't wait for my next order to arrive in a couple of weeks...) - I have been drinking lots of it over the last little while and enjoying it greatly!

When I first opened the packet there was a lovely burst of flowery aroma - roses? maybe gardenias? - sadly since it has been in its new tin the flowery scent has faded (it seems quite common for the taste and aroma of tea to change once it has been opened, no matter how well I try to store it) but there remains a very pleasant, rich warm smell in the dry leaves - it kind of reminds me of a dark spicy gingerbread, or almost chocolatey? It is not as 'muscatel'-smelling as some other Darjeeling teas that I've tried. This is not a complaint.

My nose is a bit blocked so I can't detect much in the wet leaves today, but previously I have noted some tropical fruit notes - pineapple definitely and a bit of passionfruit as well perhaps?

The brewed tea (3 minutes seems about right, as recommended on the website - scroll down to get to the Risheehat) is moderately brisk and makes my mouth tingle a bit. The further you get into the cup the cleaner and sweeter the lingering aftertaste. When my taste buds are functioning properly I can definitely detect those tropical fruit notes. 'Lush' is a word that comes to mind to describe this tea. The first infusion is the best; a second is possible but the flavour is fairly muted - although that said it is also forgiving, because half the time I pour in a second lot of water into the teapot and then can't get around to drinking it for quite a while!
Posted by Veri-Tea at 12:26 pm No comments: Links to this post