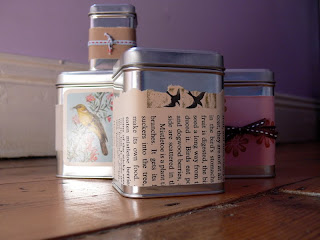 So if there's one thing that makes a nice cup of tea even nicer, it's having a beautiful canister to store your precious tea leaves in.

I'm experimenting with the idea of producing my own line of one-of-a-kind decorative tea canisters... am waiting on some samples to be delivered hopefully next week so I can work out what shape and size is best before I invest in a whole carton of the things... and have been amusing myself over the last 24 hours by decorating some of my own plain tins. What do you think? 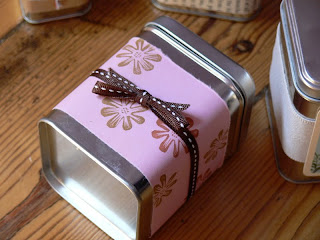 I stamped the paper for this one with a pretty flower stamped made by Riyo from Talk to the Sun. 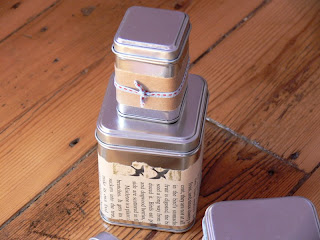 The bottom canister in the photo above is decorated with a piece of paper from a nifty vintage paper pack that my sister gave me for Christmas, and the bird card in the next photo is from the same pack. 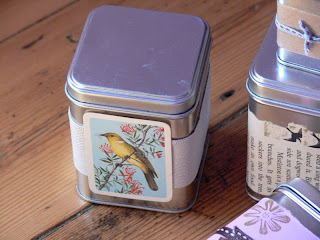 Comments and feedback welcome!
Posted by Veri-Tea at 1:06 pm 8 comments: Links to this post

Here's a few luscious green teas I'd like to add to my tea cupboard...

Organic Misty Green 'A' from SanTion House of Tea... I tried a sample size of this recently and it's delicious. Very savoury and vegetal though... not for the faint-hearted.

Uji Matcha Kiku Mukashi, from O-Cha... sounds like it would be a pretty good beginner's matcha.

And Organic Kabusecha, also fom O-Cha... partially shade-grown so it has characteristics of sencha and of gyokuro apparently, which sounds interesting!
Posted by Veri-Tea at 12:38 pm 6 comments: Links to this post

Wind whistles down
the chimney. The teapot sighs,
expelling its red stream.

The summer storm is building
black mountains on the bronze-washed sky.

Cup clinks on saucer;
waiting for the rain.
Sweat stands on skin.
Posted by Veri-Tea at 9:10 am No comments: Links to this post

Email ThisBlogThis!Share to TwitterShare to FacebookShare to Pinterest
Labels: thought of the day

Quite a few of the blogs I follow do a 'wishlist Wednesday' feature each week, so I thought I'd jump on the bandwagon. This is the first of my tea-themed (naturally) wishlists... beautiful textile products to accompany your cup of tea! Fancy a Brew Tea Towel in Sky by Mr PS
Well, of course I would... but I might need to schedule it so I don't forget: Red Floral Tea Cosy by Tractor Girl
... and the mug of course!

And some beautiful words to contemplate while I'm sipping (much too beautiful to actually use this tea towel for drying dishes!): Tea - by Carol Ann Duffy Tea Towel by Kitchen Sink Dramas
Posted by Veri-Tea at 8:55 am 7 comments: Links to this post

O how I love Tea Shop Mysteries by Laura Childs. I'm working my way through The Silver Needle Murder for the second time right now. How is it possible for something to be so dreadful... and yet so dreadfully addictive?

My husband bought the first one, Death by Darjeeling, for me a couple of years ago. I got about halfway through it and then had to put it down for about six months because it was so abysmal. Yet somehow, for some reason, I picked it up again, finished it, and have been totally addicted to these mysteries ever since. Their heroine, Theodosia Browning, runs the Indigo Tea Shop in Charleston and investigates murders - at an astonishing number of which she is present - in her spare time.

If I lived in Charleston, I would hesitate to leave the house on a Sunday night, as most of the murders seem to take place on a Sunday evening, allowing the Indigo Tea Shop team to turn up bright and early to work the next morning and hash over the tragedy. I would also think twice about attending any function catered by (tho' fortunately not at) Theodosia's shop, as there appears to be a disproportionate chance of getting bumped off at such events. This is a pity, because at least half the attraction of the books is their tea-party porn: the descriptions of the luscious goodies churned out (almost single-handedly, another unrealistic feature) of the Indigo Tea Shop kitchen by Haley, a 20-something college student, and of course the descriptions of the teas. Yummo.

There is so much I love to hate about these books. The writing verges on the groan-inducing most of the time, but I will restrict myself to a couple of examples. From the current volume: Theodosia is getting ready for some kind of soiree (as she often does; Charleston society abounds with fundraisers and social events for the well-heeled, which appears to be most everyone) and

'...she jumped into the shower. When she emerged five minutes later, looking pink and damp like a freshly-steamed rock shrimp...'

Worst simile in the history of the written word...? or at least a strong contender.

And from another volume - I shan't reveal which for fear of spoiling the surprise - Theodosia saves the day at the end by superglueing (yes, you read correctly) the villain's hair to the driveway. As if this wasn't enough reason for tears of hysterical laughter (I'm getting the giggles just thinking about it), Theodosia, the police, and a few other people then just LEAVE the hapless malefactor glued there... and all go inside for a cup of tea.

And we have a Winner!!

The winner of the Valentine's Day tea giveaway is Sash from Indigo Elephant!

Congratulations Sash, I hope you enjoy the tea immensely - I'll be in touch shortly to get your address so I can send it :)

Thanks so much to everyone who entered - stay tuned because I will be running more giveaways in the future!
Posted by Veri-Tea at 4:56 pm 1 comment: Links to this post

...the other day when I was reading a special report on social networking in my husband's copy of The Economist. At one point in the article it said something along the lines of 'If you listen to proponents of social networking, you would be forgiven for expecting your teapot to start twittering about what you had for breakfast.'

This made me smile because I actually know one Little Yellow Teapot - a very vocal and cheeky teapot too - with its own Twitter account and a blog to boot. Now if only my teapots would get their act together and get tweeting, it would save me a lot of time and effort ;)

Speaking of tea social networks, those of you who know me on Twitter or Facebook will have noticed my increasingly regular use of Steepster - fast becoming my latest tea-related addiction. Steepster is a community of tea fans of all kinds and a great place to source reviews of teas you are thinking of buying or trying, and the discussion boards are good too - check out this thread on cooking with tea for a bit of kitchen inspiration!

I shall be posting the winner of my giveaway a little later today, thanks to all who entered!
Posted by Veri-Tea at 9:59 am No comments: Links to this post

Whoa. This morning I have had my first pot of Keemun, a Chinese black tea that I've been wanting to try for a while. This one came from SanTion House of Tea - one of a number of samples that I purchased from them recently - and I just had to blog about it straight away, no photos, no nothing (though you can see a photo of it on the company's website here). This is listed as an 'A-grade' tea, unfortunately there was no B-grade for me to compare it with, but that's ok.

As soon as I opened the little packet I was struck by the strong bitter-chocolate scent from the dry leaves, with a touch of something sweeter as well, like a dark honey. I brewed about 2.5 grams (half the sample) for 3.5 minutes in about 300ml of water (might go a little longer and with a little less water next time) to produce a stunning copper-coloured infusion with a fragrance of cocoa - like cocoa being made with milk on the stove, not chocolate per se - and the smoothest mouth-feel I've ever had from a black tea. Like, no astringency at all. It was like drinking velvet. A nibble of plain buttered light rye toast went well alongside.

I have made a second infusion of the leaves and it produced a reasonable cup, though not quite as good as the first. I am torn between saving the rest of the little sample for another day, or totally caffeinating myself by using it up now (I've also had a small pot of iced sencha this morning)... oh the temptation. This kind of experience is dangerous, I find... Like right now I really should be doing laundry... but instead all I want to do is sit around sipping tea all day and compose - well, not necessarily poetry - but something, blog posts, probably - the modern equivalent of the ancient Chinese tea sages, about whom I've been reading a lot lately...

Maybe I'll just go and sniff at the leaves for a bit and contemplate restraint. Heh.
Posted by Veri-Tea at 9:40 am 4 comments: Links to this post