What's a letter worth? 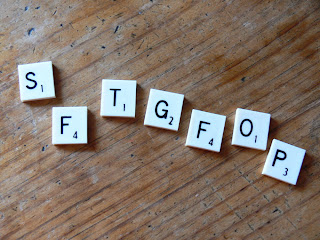 You know those letters that you see after the name of a tea - GFBOP, TGFOP, SFTGFOP1 etc etc - it's funny the effect they can have on my purchasing habits.

These letters are, for those of you who don't know, part of a grading system for orthodox-style black teas, primarily those from India and Sri Lanka (Ceylon as it used to be known). The basic is the OP - 'orange pekoe'. Many people will be surprised to learn that this has nothing to do with orange flavour in any way; it is actually all to do with leaf size. If there's a B in front of the OP, that stands for 'broken' and means the leaf pieces are not as whole as they could be.

T, G, F all stand for 'tippy' 'golden' and 'flowery' respectively and relate to the number of tips (leaf buds, which tend to turn golden rather than brown during the production process) in the tea. The more buds, the younger the leaves were at harvest, the finer the pluck, the more expensive the tea. Stick an S for 'special' and an F for 'finest' on the front of all that and you have a very fine tea indeed...

Or that's the theory anyway. In reality, the processing of the leaf probably has at least as much impact on the quality of the final product as the initial pluck. However, many people wandering into your average tea shop would not necessarily know this; and there is a bit of a 'wow factor' involved in purchasing something that has lots of letters after its name (just like looking at the business card of someone with a lot of university degrees I suppose). After all, wouldn't you like to have a bit of the most special (indeed the most finest??) tea in the shop?

But what are these letters worth really?

From a price perspective: The Assam that I wrote about the other day (see here) retails from Tea Leaves for the very reasonable price (as Alex pointed out in the comments) of A$5.50 for 100g (about 3oz). This tea is a TGFOP. In comparison, a STGFOP1 Assam retails from the same vendor for $10.45, nearly double the cost for the same quantity. These two teas may not be exactly comparable of course; for one thing, the more expensive tea is identified as a single estate tea whereas the one I bought is unidentified, presumably blended from a mixture of estates.

I almost came away with the more letter-heavy Assam; the main reason I didn't was because I happened to recall that this is a grading system based on size, not taste quality. So I reckoned I would save my pennies (well, only to spend them on some Dragonwell, ahem) and went with the cheaper version. Very happy I am with it too.

But even so - I wonder if the STGFOP1 would taste twice as nice? Or would I only think it did because it was more expensive? And anyway, doesn't it all come down to personal taste in the end? Perhaps when I run out of my current stock (which I am going through at quite a pace, I must say) I will get some of both to compare.
Posted by Veri-Tea at 12:20 pm 5 comments:

Email ThisBlogThis!Share to TwitterShare to FacebookShare to Pinterest
Labels: Assam, black tea, thought of the day

Quite a while, just over three months in fact, since my last post. Blogging got a bit on top of me I'm afraid, when added to all the other things that I both need and want to get done on a daily basis; but I do miss it, and I would like to continue this tea blog. Although, given the number of in depth, well-researched, beautifully written tea blogs out there, i have had quite the crisis of confidence regarding this one and am not really sure of what of value I have to offer in the tea blogging world. But let's just give it another go, eh?

I have, of course, been drinking loads of tea - much more hot tea than is usual for me over the summer period because it has been most unseasonably chilly and wet... The wettest it has been in Melbourne for a LONG time... I can't remember the last time I saw things looking this green.

My current favourite tea, for its undemanding yet enjoyable nature, is a tippy Assam from Tea Leaves in Sassafras, where my sister and I ventured the other week. The dry leaves smell like a brandy-rich fruit cake; brewed the taste is not super-exciting, but pleasant and robust - amazingly, you can overbrew this tea (as I did one morning when I forgot about it for about ten minutes) yet it is still delightful and does not become bitter or astringent. I even drank it black after its ten-minute steep, that's how ok it was. Also nice with a spot of milk, but really, you don't need it. I like it a lot, at any time of day.

I hope you'll stick around to read on; I'm not going to commit to any kind of posting schedule because I'm really not certain what I can manage at the moment, so I'm just going to play it by ear. But please, do comment - I read each and every one even if I don't always manage to respond in any sort of timely fashion. And don't forget to have a cuppa while you're reading...
Posted by Veri-Tea at 3:04 pm 8 comments: