My morning tea for the Cancer Council went off beautifully last weekend - thanks so much to everyone who came and supported it!

I was unfortunately too busy hostessing to take any photos... but you can see some really stunning shots, and read all about it, here on Celeste's foodie blog. Thanks heaps Celeste for the glowing write-up!
Posted by Veri-Tea at 11:48 am No comments: Links to this post

Can't live without them...


A friend of mine has one in a similar shape to this: Tea Pot by Tye River Pottery. I love the rusty colours and elegant shape. I'm not sure how functional this one would be, but it's extremely cute to look at: Pear Teapot by Clamlab. A Brown Betty is a classic, of course: The turquoise glaze on this one is just beautiful: Personal Teapot by Hodaka Pottery. Tuesday's Tea of the Week: Rosie 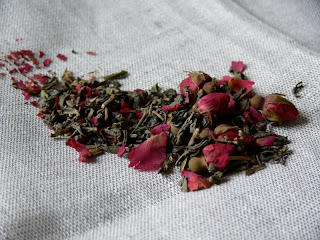 I have a cold and didn't get much sleep last night, so I'm going to keep this post as short and sweet as the tea itself. Rosie is a blend of organic Sri Lankan green tea with fragrant, lightly crushed rosebuds. It brews up into a lovely delicate infusion; no need for added sugar or honey, it's delicious just as it is.

As a side note, I really like the green tea that I use as a base for my green tea blends - it's an interesting mixture of different shades of green and is mainly comprised of large-ish leaves. Its taste is a tiny bit astringent at first, with a touch of mintiness (which I believe can be characteristic of Sri Lankan teas) but it mellows into a beautiful lingering sweetness. Very easy drinking, and it reinfuses well once or twice too.

Next week: Paintbox.
Posted by Veri-Tea at 10:15 am No comments: Links to this post

Email ThisBlogThis!Share to TwitterShare to FacebookShare to Pinterest
Labels: etsy, green tea, tea of the week

Funny things do turn up in my teapot sometimes... 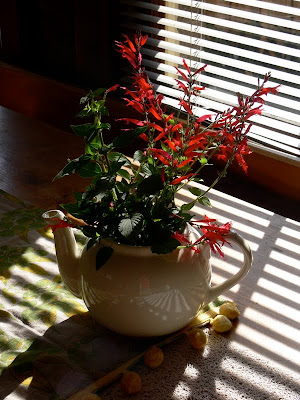 (that's flowering pineapple sage, from our garden)
Posted by Veri-Tea at 4:05 pm 4 comments: Links to this post

Email ThisBlogThis!Share to TwitterShare to FacebookShare to Pinterest
Labels: teapots

Chamomile Sunburst is probably the nearest and dearest to my heart of all my blends; it's the first one that I came up with when I was toying with the idea of setting up shop on Etsy. I got the idea for it from one of the Tea Shop Mystery books - Death by Darjeeling, I think - which mentioned a blend of chamomile, papaya, rosehips and vanilla.** I couldn't find any dried papaya, so I substituted dried apricots and never looked back. 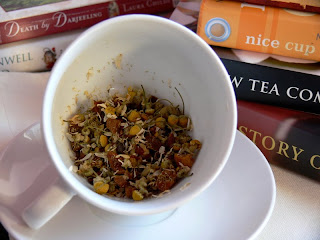 Being a herbal concoction Chamomile Sunburst is caffeine free. It has a wonderfully heady vanilla fragrance and subtle vanilla flavour with a touch of tartness from the apricots and rosehips, all mixed up with the sweet appley taste of the organic chamomile. I would love for everyone to buy some of this, not because it will make me money but because it is just so damn nice.

** Just to prove that I have read all these books too many times, I will note that this particular blend was called 'Angel Oak'. Yet in another book - I can't remember which - Angel Oak is the name given to a completely different blend. Authorial slippage? Or was the original Angel Oak just not a good seller? Only Laura Childs may know...
Posted by Veri-Tea at 10:15 am No comments: Links to this post

Email ThisBlogThis!Share to TwitterShare to FacebookShare to Pinterest
Labels: etsy, herbal tea, tea of the week

When I made my purchases from SanTion a couple of months ago, I took advantage of the sample sizes they offered to get two grades (A and B) of several of their teas: Organic Misty Green, Organic Silver Needles, Da Hong Pao. A while back I also ordered some tea from Amazing Green Tea, a special combination deal that included two grades (A and AAA) of Huang Shan Mao Feng.

I wanted to see if there was a substantial difference between the two grades of each of these teas, and if so, what that difference was; and was it worthwhile paying the premium for the top grade. I am happy to pay money for good products, obviously; but I'm also aware that just because something costs more, it is not necessarily that much better.

I didn't get around to taking photos of the SanTion Teas, but here for comparison are the two grades of Mao Feng: 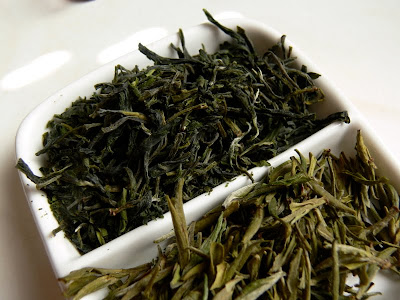 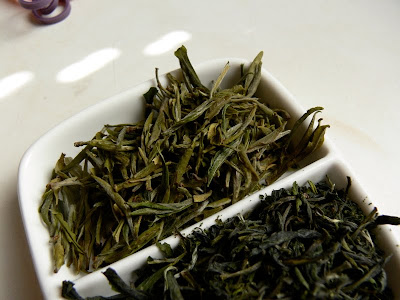 The dry-leaf differences between the two grades of the SanTion teas was less stark; the B-grade teas were less finely sorted, so there were slightly more broken or less-immaculate looking leaves, particularly noticeable in the Silver Needle and the Da Hong Pao. The A-grades were sleeker, finer; in the case of the Silver Needles, quite breathtakingly plump and shiny.

In terms of taste, however, I was pleasantly surprised. The Silver Needles and Misty Green teas tasted very, very similar, equally good; I strongly preferred the Da Hong Pao A grade, though, as it had a wonderful roasted apricot flavour that I couldn't detect in the B grade. However, interestingly, I ended up preferring the A grade ('everyday' grade) of the Huang Shan Mao Feng. While both the Mao Feng teas were delicious, the A grade was slightly more robust, fruity and vegetal in flavour, which I liked; that said, the AAA was also wonderful, varying in taste from a delicate toastiness like a Japanese sencha to a fruity Chinese-green taste depending on how long I steeped it (I found that about 7-10 minutes in relatively hot water produced the best results; only one infusion, but what an infusion! You can see my attempt to photograph the brewing tea here).

Interesting, isn't it? It's also a matter of individual taste, of course, and I definitely don't lay claim to having a truly well-developed palate, especially not when my tea drinking gets interrupted regularly by the need to tend to Pippin. I suppose the next question is: if two teas taste equally good, is it worth spending the extra money to get the 'top' grade? What do you think?
Posted by Veri-Tea at 3:59 pm 6 comments: Links to this post

I just love my Lemon Breeze blend. It's a bit summery for me to drink much of it at the moment now that the weather is cooling down, but it makes me happy just to think about it... and I'm really quite proud of the lemony photos I took as well: 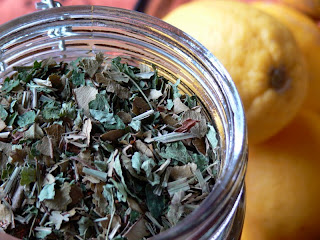 There's a triple shot of lemon goodness in this tea; the rooibos base is blended with lemon myrtle, lemongrass, and lemon balm. All the ingredients are organic. It's citrussy and refreshing and makes a great pick-me-up, but being caffeine free it can be drunk any time of the day without affecting your sleep. 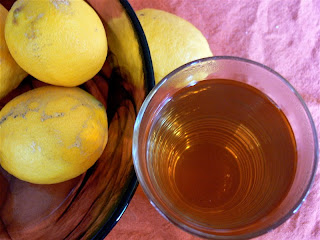 As I mentioned above I think of this a bit more as a summer tea, but drunk hot on a cold day, perhaps with a spot of lemon juice and honey, this would also be a great tonic for a sore throat and to ward off the winter blues.

Email ThisBlogThis!Share to TwitterShare to FacebookShare to Pinterest
Labels: etsy, lemon, rooibos, tea of the week

So, last Saturday was my first ever market stall for Joie de Tea. Overall, I am pretty happy with the results - I didn't turn a profit but I nearly did; and I learnt a lot as well, in the best way - by experience. The Malvern Town Hall was a beautiful venue too; all indoors and the ceiling of the main hall looked like it was designed by Wedgwood - stunning in blue and white and gold.

Here's some photos, kindly taken by my husband who did a beautiful job of looking after Pippin all day! 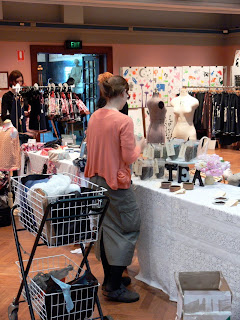 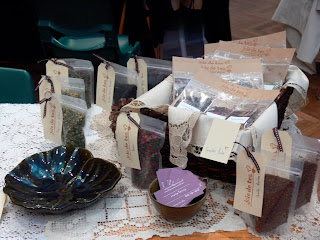 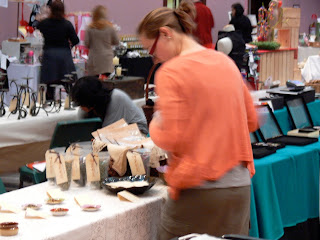 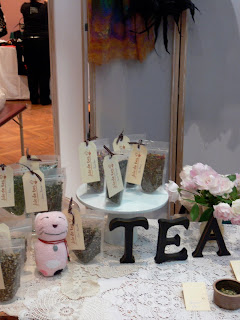 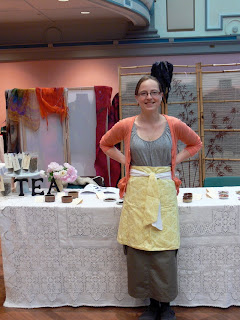 So, what did I learn?
c\_/ that the lead-up to a market is a lot of work;
c\_/ that a lot of people who go to markets are - surprise - like me, and prefer just to browse and/or are shy about talking to stallholders;
c\_/ that I need to merchandise my stall better - more height, more variety, more 'clutter' to make it look good (but I've got some great ideas for next time, involving things like stacks of books and that kind of thing, product information, signage and brochures);
c\_/ that I need to work on my patter with the customers... got to get over that shyness! and
c\_/ that it is really, really nice to have an almost-completely baby-free day once in a while! My goodness, how different it was to my usual daily routine!
So many thanks to the friends who stopped by to keep me company and to all the lovely customers that I had. All in all I'm very pleased with the whole experience and I think I will apply for another stall at the Modish Market - perhaps not the June one, that might be a bit rushed to get all the things organised that I would like to - but for August. I'll keep you posted!
Posted by Veri-Tea at 8:19 pm 5 comments: Links to this post

Email ThisBlogThis!Share to TwitterShare to FacebookShare to Pinterest
Labels: markets, thought of the day

I thought I might spend a little time introducing you all a bit more to the blends that I make... so here is the first post in a new series: Star Anise Basic Black.

This blend is, as the name indicates, part of my 'Basic Black' tea range - organic black tea from Ceylon (Sri Lanka) mixed with a single other herb or spice, allowing the flavours of both ingredients to shine through with eloquent simplicity. 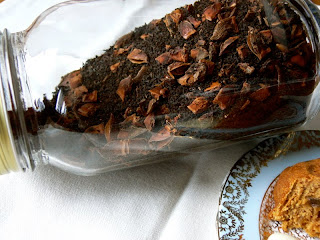 I was inspired to make this blend by a good friend of mine who has a tremendous love for star anise. The heady liquorice flavour of the spice goes beautifully with the smooth base of the black tea and is wonderfully invigorating yet also elegant. 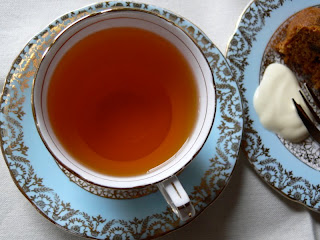 It makes for an exquisite tea to serve after dinner with dessert... and a good digestif as well.

Email ThisBlogThis!Share to TwitterShare to FacebookShare to Pinterest
Labels: black tea, etsy, tea of the week

In case you were wondering about the blog silence over the last week or so, it's because I have been more or less frantically preparing for the Modish Creators Market at the Malvern Town Hall which is being held THIS SATURDAY, 8 May. My first market stall for Joie de Tea and I am both excited and nervous.

However, thanks to some wonderful help from the best mum ever, who cut ribbons and tied labels onto dozens of bags of tea for me last Friday (and maintained it was fun! don't you love her!) I am just about organised.

Here is a sneak preview of my table layout which Mum and I trialled on Friday... 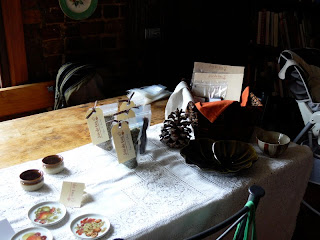 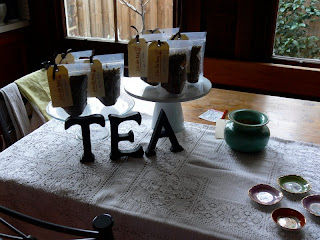 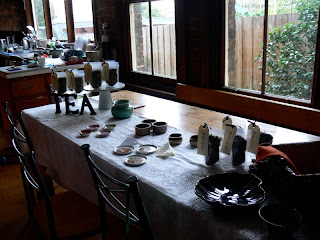 Check out the Modish Creators Market blog for lots of great info about the stallholders... including my interview... it's going to be a great day and if you're in Melbourne I'd love to see you there!
Posted by Veri-Tea at 1:22 pm 2 comments: Links to this post