As I was stumbling up to bed following the baby shower my friends threw for me and my husband last weekend (yes... we scrapbooked til midnight to produce the most awesome baby book EVER. Crazy times) I thought I caught sight of something on the mantelpiece in the baby's room... but it was dark, and I was very tired, and so I didn't investigate any further.

Later the next morning though, I discovered that the mystery shape that I had half-discerned the night before was in fact this beautiful new tea set: 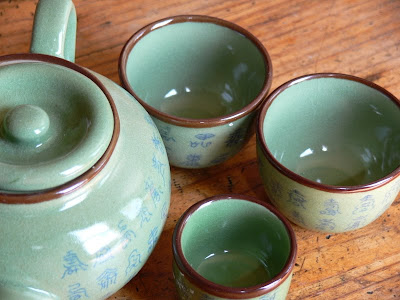 ... complete with three cups: two big ones and one little one!

I asked my slightly bleary husband if he knew anything about it; he didn't, but suggested that this thoughtful gift was probably due to a visit from the Teapot Elves (entirely plausible, I thought). As it shortly turned out, the Teapot Elf in question was my sister. What an awesome present... I can't wait to share it with Little X at an appropriate time after his or her arrival...

The next question is, of course, what tea shall I pack in my hospital bag to celebrate said arrival? It must be robust enough to withstand hospital water and temperature (which I am prepared to accept may be sub-optimal) yet special enough to be celebratory. I shall have to devote more thought to this pressing issue over the next few weeks. Suggestions welcome!
Posted by Veri-Tea at 11:22 am 5 comments: Links to this post

This is another generous sample which Tony from High Teas was good enough to send me.

The dry leaf has a good fruity aroma. In appearance it mostly consists of dark brownish-black, shortish twisted leaves, with some lighter-coloured tips scattered throughout. I brewed a slightly heaped teaspoonful in about 300ml of water for approximately 3 and a half minutes; the wet leaves smell sweet. They are plumpish, evenly sized and copper-coloured with tinges of green.

The liquor also has a good fruit aroma and taste, quite similar to the smell of the dry leaves. It's a gorgeous transparent copper colour, as you should hopefully be able to see from the photo (which is unfortunately a little blurry; I blame my husband, who used the camera last. He fiddles with the settings, because he knows how to take more fancy photos than I do, and then my photos turn out disastrously because I don't realise). 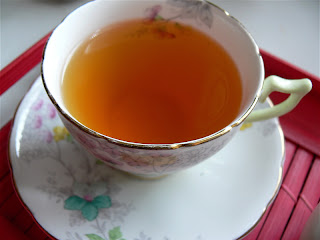 The taste is a little dry - in a good way - with very mild astringency (but slightly more astringent than the Badamtam which I wrote about here). The slight astringency builds in the mouth very pleasantly as you work your way through the pot. I'm just sipping on a second pot, which I steeped for 4 and a half minutes this time; stronger flavour and colour, but still only pleasantly astringent.

I've been drinking quite a lot of this tea over the last few weeks - it's incredibly easy to drink, with a lovely rewarding flavour, but the added bonus is that it's also ordinary enough to be an 'everyday' tea. I don't mean ordinary or everyday in a negative way, because this is a high quality tea, but you could drink it out of a mug at work* and feel sustained, a little bit spoiled, but not flouncy, if you know what I mean.

I have found that the Castleton Autumnal is a good tea to pair with food, particularly something that's a bit sweet and a bit rich. Interestingly, these kinds of foods seem to bring out the flavour of the tea, rather than mask it (as can often happen). I served it at brunch one Sunday with a Cornish-type saffron cake (which is more like what we think of as bread these days, yeasted and loaf-shaped), with which it went beautifully. I also used it to soak some prunes which were to be included in a recipe (courtesy of a friend) for a chocolate brownie - fantastic flavour addition (and a really great brownie too, although the prunes would have been terrific just on their own, or with some yoghurt or something like that).

I haven't had an autumnal flush Darjeeling before, and I've just pulled out my copy of The Story of Tea to see what the Heisses have to say about them: it seems that the autumnal flush is the last to be picked each year, between October and November, and is known for being rich, smooth and soft in the mouth. Well, that sounds about right. Jane Pettigrew's New Tea Companion also indicates that autumnal Darjeelings have a bit more body than the earlier season teas; again, that sounds about right; I thought I noticed a nice round mouth-feel. Good to know that I'm picking up on a few things as I muddle my way along the tea trail...

It has been One Of Those Weeks, and the week before was likewise One of Those Weeks, making this, in sum, One of Those Fortnights. So I have had very little time to devote to my poor neglected blog, and almost as little to devote to drinking tea, which is a Bad Thing. However, today is quieter and the next few weeks also promise to be a bit less frantic, so hopefully things will improve in both those areas.

My taste for tea at the moment is a funny thing. I still haven't quite recovered my pre-pregnancy liking for Chinese or Japanese greens; I find that I talk myself into drinking them occasionally because they're sitting there in the cupboard and need using up, or because they're 'good for me' (yes, I get a bit suckered into that hype too, still). And then I'm almost surprised that I enjoy them, although it does take me a little longer to get through a pot than it might have before.

I had this experience yesterday over a couple of infusions of Mao Feng from Oriental Tea House (no link, sorry - the tea section of their website appears to be malfunctioning today). It's really a very nice tea, to look at as well as to taste - the wet leaves are like little dusty-green spears, and it has a mouth-filling savoury kind of flavour, very little sweetness on the finish - but I forget that I enjoy it.

Still, perhaps now that the weather is warming up (finally) I may feel more like my green teas again. It's been so windy and rainy over the last few weeks that black teas have seemed more appropriate; it's kind of irrational I suppose, but they do seem to be more warming and comforting in the cold weather than the greens. I love my cold-brewed iced greens in particular... looking forward very much to the weather being consistently warm enough for those again! 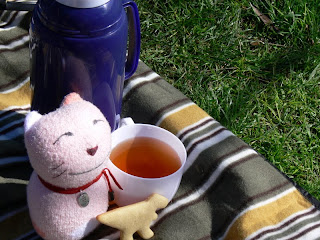 Sunny enough for a picnic today!
I think I'll head downstairs and brew myself up a pot of something now... what will it be?
Posted by Veri-Tea at 2:40 pm 4 comments: Links to this post

Email ThisBlogThis!Share to TwitterShare to FacebookShare to Pinterest
Labels: thought of the day 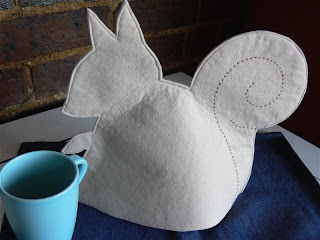 In this photo it is keeping my pot of Castleton Autumnal Darjeeling warm... lovely!

I first saw the pattern a couple of months back in my copy of Notebook: magazine - you can find it online here - and thought at the time how much I would love to make it. Alas, I have neither the skills nor the equipment necessary to machine-sew anything (a little basic embroidery and button sewing is my limit), but I kept it in the back of my mind, just in case.

Then a few weeks ago I discovered the Alchemy board on the DUST (Down Under Street Team, of which I'm a member) Forum, and I put up a request to see if any of the other talented DUSTers might be interested in making it for me. Lo and behold I got a response from the lovely Luisa from Dance in My Garden, who very kindly offered to make it for me.

The pale creamy colour of the felt and the finely-worked contrasting stitching is a perfect complement to my smaller teapots - this tea cosy fits comfortably over both my 350ml beehouse teapot and my slightly larger 450ml one. It's probably not as warm as a thick knitted or quilted cosy, but I think it does a pretty good job, and it's so cute (not to mention Tea Correspondent approved)!* 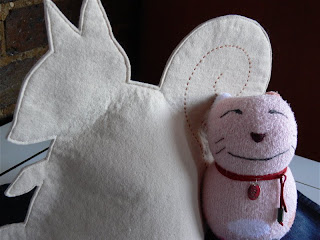 Luisa normally makes lovely bibs and other items for little tots, but was happy to have the chance to make a 'grown-up' item for a change - and she did such a beautiful job on my squirrelly tea cosy, I would have no hesitation in purchasing any of her other items (I'm keeping a close eye on them for when our baby is born in a few weeks). And she has also just introduced some 'drink cosies' to keep your fingers from burning on hot cups... perhaps I need one of those too...?

*That said, I do have an urge to photograph it in sinister silhouette in a lighted window, I'm not quite sure why.
Posted by Veri-Tea at 9:45 am 10 comments: Links to this post