Tea Drinks: Not for Purists, I

I've been experimenting with a few different blended tea drinks lately, and I'll be posting about those further when I've had slightly more success with them and am able to take some decent photos. In the meantime, I thought I'd post a recipe for the delicious matcha smoothie I whizzed up for myself today - just what I needed for a mid-morning snack-and-tea-in-one, especially after a night of insufficient sleep; it really picked me up and kept me going til the mid-afternoon.

You will need:
A blender
A ripe banana
A glass of milk (about 300ml)
Vanilla extract (to taste; I like lots)
1 tsp matcha powder

Put the milk, banana and vanilla extract in a blender and blend until smooth. With the blender still going, add the matcha powder and mix until thoroughly combined and a uniform greenish colour is achieved. Drink and enjoy!
Posted by Veri-Tea at 9:47 pm 10 comments: Links to this post

Quiet words to contemplate with a cup of tea

Go placidly amidst the noise and the haste, and remember what peace there may be in silence.
- Max Ehrmann, Desiderata 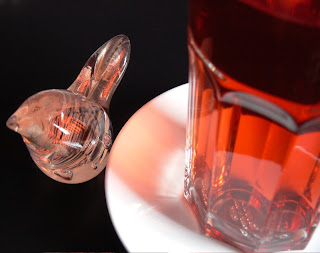 Posted by Veri-Tea at 9:26 am 2 comments: Links to this post

Email ThisBlogThis!Share to TwitterShare to FacebookShare to Pinterest
Labels: Philosophy of Tea, thought of the day

Just a very brief little spot of self-promotion... it's taken me a while, but my teashop is finally live on Etsy! 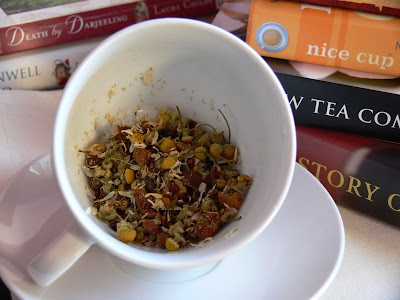 I love trying out different blends of herbs, spices and teas for my own consumption... and so I've taken a bit of a plunge and listed some of my more successful experiments for sale on Etsy. Find me there under joiedetea (all one word) - at the moment there are five different herbal blends, and I have ideas for oodles more of all kinds in my head - it's just a matter of combining everything just so to produce the right end result (as some of you would know, being tea blenders yourselves - it's not always easy)!

This is a ship-within-Australia only effort at the moment, given my nervousness about navigating my way through the customs issues involved in shipping plant matter to other countries, but I'm hoping that it will be a handy first step on my way to my final goal, which is a real, live, bricks and mortar teashop of my very own (one day!)... but the main thing I am looking with this little venture is to have fun (and share tea with people). I have a few more ideas up my sleeves for other tea-related items as well!

But wherever you live please stop by and have a browse - I'd love to hear any of your comments or ideas for tea blends!
Posted by Veri-Tea at 4:30 pm 2 comments: Links to this post

Email ThisBlogThis!Share to TwitterShare to FacebookShare to Pinterest
Labels: etsy

Last weekend it was my dad's birthday, and to celebrate we trekked out to a little antique-shop-with-cafe in Watsons' Creek... just a small place, featuring robust home-cooked meals (and plenty of them) and stunning cakes, served on the enclosed back verandah outside the antique shop itself.

Naturally I was on the hunt for vintage teawares and I did not come away disappointed. There were a few lovely offerings there, including some full tea sets that were unfortunately out of my budget range, but then I saw this tucked into a glass-fronted cabinet and knew I had to have it: 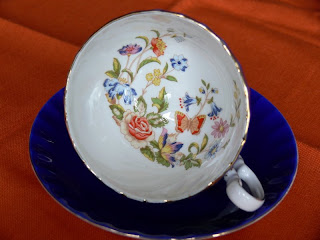 It's Aynsley bone china, no pattern name or number listed on the bottom, and a Google search hasn't helped me identify it, but no matter. It's in perfect condition, too, apart from a little wear on the gilt around the lip of the cup and the edge of the saucer, although I'm not sure how old it is. 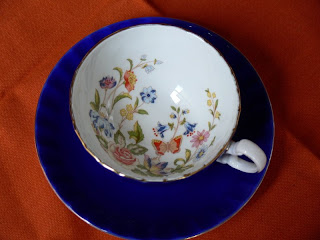 I particularly like it because it's so different to most of the vintage teacup sets that I have (quite a few of them are Aynsley, as well) - most are white or cream with various flower patterns, roses being heavily represented, and much as I love them this one really stands out with the gorgeous cobalt blue of the outer cup and the saucer. Also, while I have a number of cups with a little bit of the design inside the rim, I don't have one that features it like this does - such a lovely surprise compared with the relative plainness - or, well, simplicity might be a better term - of the outside.

I can't wait to use it; I've been saving it up for something special - I think perhaps an oolong or a Darjeeling, something with a clear pale or coppery colour so the design on the inside of the cup still shows through... it would be a pity to conceal it by drinking something that has milk added.
Posted by Veri-Tea at 1:41 pm 3 comments: Links to this post

These gorgeous little teacup candles arrived on my doorstep the other week - my housewarming present to myself (or at least that's my excuse anyway): 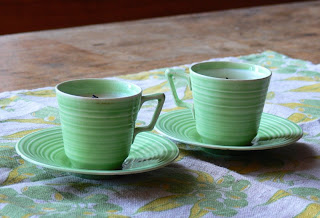 I found them browsing on Etsy through the 'shop local' feature, where I was looking at recently listed items from sellers in Melbourne and Sydney. There were so many beautiful designs to choose from, but I fell in love with these, plus I figured they would go very nicely with our dinner set. They've been gracing the dining table on most nights since they arrived. 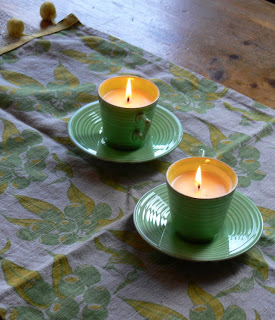 They're made from upcycled vintage teacups collected by the lovely Ruth at Twilight Spells in Sydney and are filled with clean-burning soy wax. Check out the others in her shop - they are too pretty for words, and you can choose your own fragrance for the wax (or leave them unscented). I decided on honeydew melon for these ones, largely (I confess) because the cups themselves were so green; they smell delicious, sweet and fruity without being overpowering.
I generally prefer to drink out of my vintage teacups (of which I have a slowly increasing collection - another post about that to follow shortly), but this is such a terrific idea I wish I'd thought of it first... Thanks Ruth, I will be checking in at your shop regularly!
Posted by Veri-Tea at 11:41 am 2 comments: Links to this post

Too much to hope for?

My husband and I are safely ensconced back in Melbourne - hooray! - and are getting along with unpacking, organising, blah, blah, ah well it's MOSTLY done (just as well).
Just before we left Canberra, however, we went to Silo bakery for breakfast on a Saturday morning - we would normally get our bread there, but it being so very very busy would rarely sit down to eat. However we decided we would on this particular morning, so my husband enjoyed a hearty breakfast of Welsh rarebit while I had an almond croissant (Silo almond croissants are divine and I shall have to (oh yes, it's necessary) go on a hunt to find an equivalent in Melbourne) with a plunger of Earl Grey (I think from T2). Earl Grey and almond croissants are a totally marvellous combination and one which I have enjoyed at home on previous occasions, as per below: 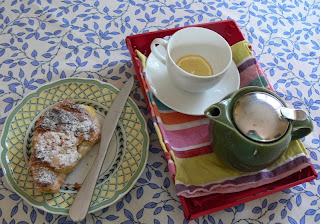 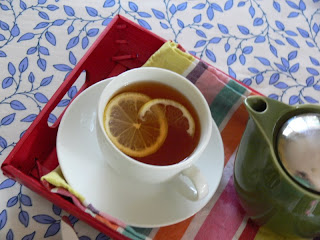 However, I also discovered that Silo offered a range of other teas, including Gyokuro - which I have never seen on a cafe or other menu before. I was intrigued enough to order some after I'd finished my Earl Grey... how would they brew it? Would it be drinkable??
The short answer is, they brewed it with boiling water in a plunger, the same way they did for other teas, and it was not drinkable at all, precious, no it wasn't. I plunged it as soon as it arrived at the table; the liquid was a cloudy, murky off-green, the taste was extremely bitter (and not in a good way) with no subtlety - it had been burnt beyond recognition... Such a shame. I hadn't really expected it to be properly brewed (though Gyokuro is not easy to brew, as I have found myself), but for such an expensive and rare tea  it really was a sad thing. How are people going to be encouraged to expand their tea horizons if they order something exotic like this and then find that it's not even drinkable? And then no one will order it and it will be taken off the menu so that there isn't even an option and it's back to the same old round of chamomile, peppermint, English Breakfast, Earl Grey, unspecified 'green', lemongrass and ginger. Argh!
I am not normally this snarky, but I was cranky enough that I wrote a little note on a napkin saying they should brew their Gyokuro at a much lower temperature for only a short amount of time, as it was undrinkable - I imagine this was duly ignored and promptly thrown in the bin, heh, but never mind...
On the plus side I did have an enjoyable pot of white tea at Rubicon the night before we left, following a delicious meal and dessert... so perhaps there is hope yet!
Posted by Veri-Tea at 9:10 am 5 comments: Links to this post