Well, New Zealand, technically, but I had so many very pleasant experiences with tea while I was over there that it almost did count as New Tealand, really.

While there were many highlights of our trip, most of them either nerdy (full day LOTR tours, anyone? Bliss!) or foodie (full day tasting tour in Martinborough and surrounds, plus many delicious restaurant meals) I will restrict myself to the tea highlights (tea lights? Hmmm) because those are what this blog is all about, after all.

It proved not very difficult at all to get decent loose-leaf tea in restaurants, particularly in Wellington where most places seemed to stock T Leaf Tea. The branding of this tea is very similar to T2 (black and orange) and they provide a similar range of products but also some that I hadn’t seen before, including quite a good range of single estate black teas and the best variety of beehouse (now known as ‘zero’) teapots I’ve seen – lots of different colours, so pretty! I would particularly like one in pumpkin orange…

One night in Wellington we went to Sweet Mother’s Kitchen, a place that serves really good deep-South of America type food, for dessert and tea. I was delighted to find that the tea itself (a raspberry and vanilla flavoured rooibos, very sweet and pleasant, not overpowering at all) was served in a beautiful blue-flowered Royal Albert tea cup, with matching plate. 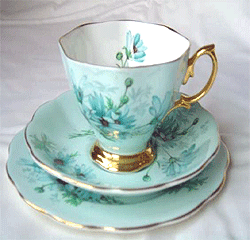 I am pretty sure that this picture depicts the pattern (it’s from an unnamed set matched with the pattern ‘Marguerite’, which I found thanks to this site.

Now I was also conscious of the need to sample some NZ biscuits, along with my tea, and on the matching plate which came with my tea at Sweet Mother’s Kitchen I tried out an afghan biscuit. These chocolate biscuits with chocolate icing on top seem to be very popular in NZ (there are also supermarket versions, though I skipped those in favour of trying out some Toffeepops, which were yummy). The one I had that evening was absolutely sublime. It had crunchy bits in it (which, after looking at some recipes online, I have deduced to be cornflakes or weeties), it was crumbly and buttery and chocolatey, and the icing was fantastic. Yet overall it wasn’t too sweet either. I am going to have a go at making some of these - here is one recipe, and here is another.

In Auckland, we went shopping to get my husband something nice at a men’s clothing shop called ‘Marvel’ (he bought a very nice striped top) – and I came away with, of all things, a teapot (the owners of the store appear to be collectors of vintage china, particularly Crown Lynn NZ made stuff). It’s a lovely deep sky blue glaze, cream coloured inside, and the most perfect pouring teapot I’ve had – not a drip! I will post a photo of it when I have a chance. So that absolutely made my trip, that’s for sure.

Another tea highlight was when we went out for dinner in Rotorua – we went to an Indian restaurant recommended by Lonely Planet, where we had the best Indian food I’ve eaten since leaving Melbourne last year (seriously). I ordered a cup of their chai masala tea, which was delicious – I think it had quite a bit of black pepper in it, it had quite a kick. I do like my chai with pepper, it always seems more exciting somehow than just with cinnamon and so on. I am going to have a go at blending some of my own at some point.

That’s all the tall tea tales I have time for today folks, but I will return. I have been having great success with iced tea, for example, and I have photos to post, and new teas to try, and many more things to rant about.
Posted by Veri-Tea at 8:29 am