I didn't think I would ever find a tea-soaked fruit cake that I would like better than my beloved Marmalade Tea Loaf, but I have. It's the Barm Brack recipe from (appropriately enough) the Nursing Mothers' Association of Australia cookbook.* 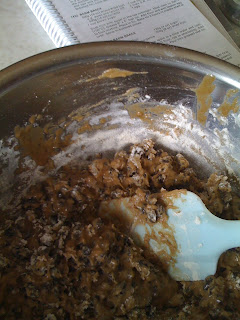 Barm Brack is an Irish fruit loaf, often served with a cup of tea in the afternoon; it may be yeasted, or not. 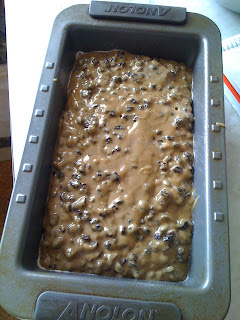 The version I made is unyeasted, and could not be simpler. You are meant to soak the fruit in the tea overnight; I wasn't that organised but it didn't seem to matter (thought I should probably do it properly next time). The recipe in the NMAA book says you can use mixed dried fruit or a single one; I opted for currants and soaked them in a strong cup's worth of Ceylon tea - although I suppose Irish Breakfast would be most appropriate!

Here's the recipe as I made it:

500g currants
250ml strong black tea, hot
1 cup brown sugar
2 cups self-raising flour
1 egg
Mix the currants and sugar together and soak in the strained hot tea for an hour or so (or ues cold tea and soak overnight).
Preheat oven to 150C and thoroughly grease a large (9in by 5in) loaf pan (if it's not non-stick you may want to line it as well just to be sure)
Stir the flour and the beaten eggs thoroughly into the fruit mixture. Pour into the prepared tin and bake at 150C for about 2 hours (mine took about 1 hour 50 minutes).
Allow to cool for 15 minutes in the tin, then turn out and cool completely.
Serve sliced with butter and a cup of your best black tea. 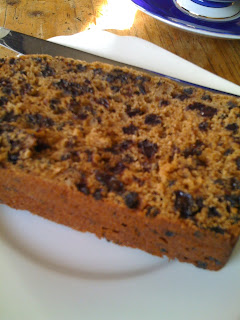 I can't tell you how well this went with a pot of Margaret's Hope 'Silver Moon' second flush Darjeeling (from Thunderbolt Tea) - the currants and the muscatel flavour of the Darjeeling were perfect together.

*My mum cooked lots of stuff from this when I was little, and still goes to it for many cakes, which are all delicious. She bought me a new copy just before I had Pippin; it is unchanged - and I mean unchanged, curried sausages with sultanas and all - from the original 1975 version. I'm not game to make the curried sausages as I have less-than-fond memories of them from my childhood, but the cakes and slices really are excellent.