It is downright freezing in my house today despite being the middle of October , so I am happy to be experimenting with some new tea blends (using as a base the Sri Lankan green that I wrote about here) and drinking lots of hot tea. 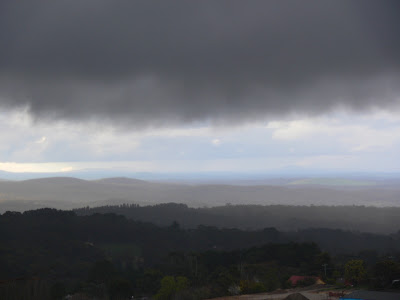 This photo was taken in Daylesford about 6 weeks ago, but the weather's not much different today!
As I have discovered over the last six months or so it is not actually that simple to create green tea blends using only natural herbs and spices (as opposed to flavourings/essences, whether natural or artificial in origin). This is primarily because of the different brewing temperatures and times of the different components: green teas generally yield the best results from short steeps at a lower temperature (around 80 Celsius), but herbs and spices need higher temperatures and longer steeping times to release their flavours properly. So it's not as easy to create a really lovely tasting green tea blend as it is to create a black one where the temperature and time factors are more similar.

My first trial batch this morning is a Moroccan mint-type blend (using dried herbs obviously, instead of fresh ones as I did the other day) of green tea, peppermint and spearmint. In the interest of scientific curiosity (and not freezing to death) I decided to try brewing two separate pots, one with water straight off the boil (yes, I know... I shuddered merely thinking about it but I did it anyway; that's just how intrepid I am) and another with water cooled for 3 minutes or so to about 75-80 Celsius. Unfortunately I don't have two teapots of exactly the same type and dimensions, but I did my best to keep the proportions of tea and water the same - 2 rounded metric teaspoons to about 400ml water, steeped for about 2 minutes.

Both teas were quite tasty (I think at least partly owing to the fact that the mints are powerfully flavoured in their own right and so probably relatively well-suited to brewing at different temperatures) but I preferred the one brewed at the cooler temperature. I'm hoping this isn't just my innate prejudice regarding the 'proper' way to brew tea; I really did try to keep an open mind and was even sort of hoping that the boiling water one might turn out better. But it had a strange kind of metallic taste to it that wasn't present in the other... not very pleasant. So once I get this blend up in my shop I will definitely be recommending that it be brewed with cooler water.
Posted by Veri-Tea at 9:23 am